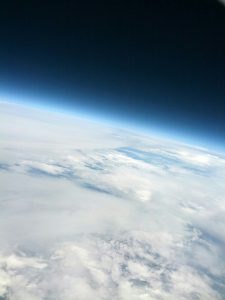 Figure 1 – A picture from the balloon Actarus project

A convenient way to gather atmospheric data at high altitudes is to use weather balloons (current record altitude for unmanned gas filled balloon seems to be 53 km of BU60-1 Japanese balloon). As this kind of devices is used for weather forecast and research the specific literature on the topic is widely available [1] and consolidated. Air data systems are a common payload across that kind of probe, from here our interest on the topic. Here we introduce the basic hardware, provide a basic calculation script for balloon sizing and describe the ground filling operations. The topics involved are different and heterogeneous so we will split topics along a mini-series of articles on balloons.

We will focus on the most common DIY setup, a sealed balloon filled with helium and with a rope suspended payload. Helium is lighter than air so it makes the balloon float.

Any component you chose to use should be reliable, safe and disposable. Redundancy can be the winning choice. The payload can be put within a box or exposed to the atmosphere, in both cases consider the low ambient temperatures; temperatures can affect electronics, and batteries, nominal operation. In the tropopause the temperature can fall below -50°C.
Refer to Figure 2, the probe is composed of five main parts. The balloon, the rigging, the recovery parachute, the payload and the balloon filling gas.

The typical setup is shown in Figure 3. We will focus on latex sealed balloons, this kind of balloons will expand as the probe ascends and will burst when their maximum diameter is reached. Availability is good and they are affordable. Medium high altitudes, let’s say around 30 Km, can be reached without too much hassle. The balloon is secured to the hanging payload by means of strings, any string or accessory used for this purpose is part of the rigging. That is not an issue for small payloads but it is of relevance with heavy payloads; balloon wall is thin, it’s not able to support heavy loads, a concentrated load will pierce the envelope. The parachute will slow down the payload descent when the balloon explodes, during the ascent, the parachute is already exposed and hangs from the rigging. 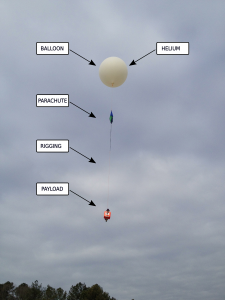 Besides that, you need mission specific hardware. You find a typical list of components in Table 2. 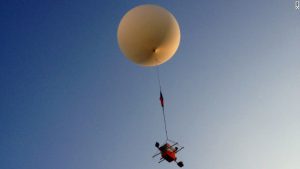 To produce a really simple, and conservative, model we will work under strong simplifications; generated model can be used during the hardware selection phase but it is not suitable for accurate performance prediction nor for flight simulation.

Refer to figure 5, let’s model the whole probe as a mass point. Our probe floats thanks to the buoyancy. The upthrust

is the balloon volume and g is the gravitational acceleration.
The balloon, of diameter

will expand as the air density decreases, as a direct consequence the forces exerted on the balloon material will increase. In the specific case [3] the stress on the material section will be equal to

is greater than air pressure

. The pressure inside the balloon is not equal to the external pressure. To avoid the mechanical treatment of the mechanical expansion we will work under the hypothesis of “rigid balloon” or the so called not stressed balloon, the internal pressure is exactly the air pressure. During the ascension, the balloon will expand because of the temperature change to the air and to the helium. During the ascent the air temperature will change, the helium temperature will change too. The temperature distribution across the balloon volume will not be uniform, as a simplification in our model the temperature will be a determined parameter. The temperature across the atmosphere will be assumed to be distributed as per the U.S. 1976 Standard Atmosphere [4]. Solar radiation contributes to balloon energy balance [2] so will have an impact on expansion, we will neglect also that contribution, for the peace of the mind think that you are estimating the performance of a night launched balloon; bibliography reports [2] lower ascent ratios during the night. 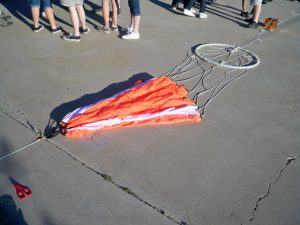 The weight force acting on the probe is

is the total probe mass. Another force acting on the probe is the drag exerted by the air the probe is moving in. The direction of drag is dependent on the lateral movement of the balloon. Laterals dynamic of the balloon is dominated by horizontal wind component. For example purposes we will consider a small angle of attack

is the still air rise rate in m/s,

is the cross area of the balloon and

and Re. This drag coefficient should consider the contribute of the payload and rigging, but this former contributes are often neglected, most accurate way to determine coefficient value is by flight test [2] or wind tunnel testing.

A less accurate approximation is to consider the balloon as a perfect sphere, in such a way we can use the coefficient of drag for a sphere. We will operate with that assumption. The coefficient of drag of a sphere depends on the Reynolds number [2], so on the density; for this reason, the

should be considered a function of Re and practically of altitude. In our model we will set the drag coefficient at 0.47; that will be a value too high for ground conditions and far more appropriate for low Re high altitude conditions. Setting a high will overestimate the drag force near the ground, that will give to us an optimistic or conservative estimation of balloon performances as the ascent rate. 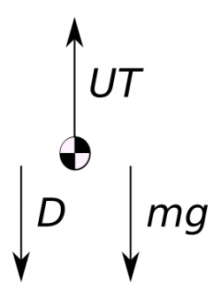 Given the mass of the payload and rigging

, the mass of the balloon

and the mass of helium contained within the balloon

we get that the net buoyancy force

Combing Equation 1 and 2 we get the probe rise rate in still air:

At the balloon bursts, the probe will initiate to fall back to Earth. To avoid mushing of the payload the recovery parachute should be correctly sized. Reusing ascending equations and replacing the parachute coefficient of drag

instead of the balloon

we get the expression of vertical descending speed.

is the area of the parachute. Equation 4 neglects the contribute of the payload drag, likely we will overestimate the descending speed.

Prior to any launch please check your local regulations about unmanned gas balloons launch. To date (15/04/2016) in Italy in necessary to notify the launch to ENAC, with this modules. The Italian Civil Aviation Authority names the ICAO [5] Annex 2 Appendix 4 as the source for determining what data should be communicated prior to launch to ENAC.
ICAO define different classes of unmanned balloons, classification is based on payload weight. For example, a balloon with a single package payload(anything different from the balloon) that weights less than 3kg is considered as a light balloon. To be considered light the payload should be suspended with a rope that requires an impact force less than 230N to be separated from the balloon. Another requirement is to have an area density of less than 13g per square centimeter. To calculate the area density you should divide the mass in grams of the payload package by the area if square centimeters of the package smallest surface. A light balloon has less operating limitations respect to heavy balloons. 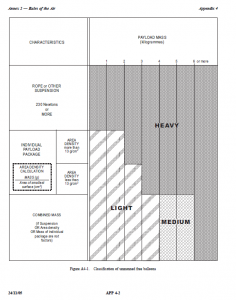 The design is an iterative process, sometimes you should redo the same procedure over and over up to the solution convergence. At first, you need to decide you mission objective, the more constraints you have the faster you will found a solution.

For example purposes I selected the following requirements.

Note that in the list it is included the burst diameter, that data should be supplied by the balloon producer.
As a result of the preliminary design, we will determine the required balloon size, the mass of helium to load into the balloon at ground and the buoyancy at ground. You can see the desired design output parameters in Table 3.

, Vertical speed at ground at

We have a model of our balloon and we have defined design output parameters, within the next post we will use a Scilab/Matlab script for sizing.

Here we walk through a preliminary design example. Recalling the model of the ascending balloon and the rigid balloon hypothesis we observe that net buoyancy

during the ascent is constant. The calculated data will be used to launch, so inflate, properly the balloon. Measuring the balloon volume it is not an easy way to go, usually, the easier way is to measure free lift force at ground. You can use this [download id=”2565″] to calculate lift at ground, rise time, fall time, average speed during rising, and the required mass of helium. Input data will be burst altitude [m], payload mass [kg], balloon mass, balloon burst diameter [m], fly time in minutes, parachute coefficient of drag, vertical descending desired speed at ground[m/s]. To launch a preliminary design, with our example data, we invoke the SizeProbe function in the following way:

The results will be:

Burst diameter should be read from producer data or found by experience, for example, see this table. You see that our preliminary design gives to us an indication that our balloon sizing can provide the required performances.

Another alternative and quick way to proceed is to use online design tools that are prepared by the balloon producers, for example.

I report here some other helpful online design calculator:

Typically those tools are designed to be on the safer side, they will be pessimistic about performances; results are good for design but do not provide an accurate balloon behavior description. We have other aspects to consider before the launch, as the trajectory prediction. Balloon trajectory is highly dependent on the wind. Once again we’ve to consider that the available data on wind is far from to be complete or exact; often we desire to know a trajectory in the next future and so the simulations will be based on a wind forecast. Beside that we can find some trajectory predictor, for example, this in this link from CUSF. From the predictions, you will notice that balloons will cover wide distances, it is necessary to have one or more well-prepared recovery teams that can easily travel across the country.

We use cookies to ensure that we give you the best experience on our website. If you continue to use this site we will assume that you are happy with it.Ok