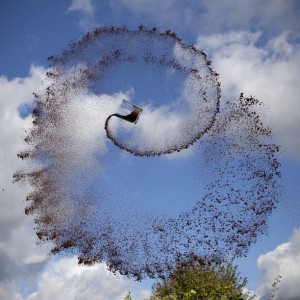 . Let’s make things a bit simpler and start with a simple relationship between density and temperature:

The temperature in the SI is measured in degrees Kelvin, but many equations of state may also be given with temperature expressed in

For dry air, the ideal gas equation of state is:

The main advantage of the equation of state is that it provides a closed form solution, which in turn can be incorporated in other computations. This is a very convenient property for analysis purposes. Let’s proceed with a density calculation. Refer to figure 1; our idealized test setup is a room with two thermometers and a fan. The first thermometer measures the temperature of the air in the room at a point far away from the fan effects, while the second one is subject to the direct airflow from the fan. 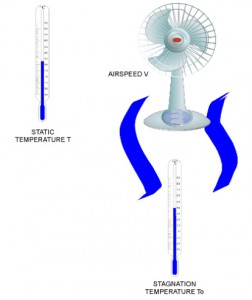 In our example, the air from the fan which hits the thermometer is brought to rest on the surface of the sensing element. Consider an infinitesimal volume of the overall air stream traveling at a certain speed.

This small volume has a corresponding kinetic and gravitational potential energy. If we assume that this volume does not exchange any form of energy with the surroundings then this energy must be converted when one of its forms is eliminated. In the process where the air slows down, kinetic energy is converted into heat, which causes a temperature rise.

Assuming an adiabatic process we can describe the enthalpy at stagnation:

For an ideal gas it holds that

for an ideal gas

This equation defines how much the temperature rises because is adiabatically brought to rest.

Returning to our example let’s calculate the different values of stagnation temperature in correspondence of different airspeed values. You can find pre-calculated values in the table below.

By inspection of the table, the deviation between the two temperature measurements increases with the .

The air density in the room should be calculated using the static temperature, in our case, e.g.

the corresponding density is

. The same calculation using the total temperature with a fan pushing the air at 55 m/s gives

Inspect the relationship between the static and total temperature for a total air temperature probe; the first formula in this link.

and the Mach number expression:

The total air temperature computed up to now here is somewhat ideal. All the kinetic energy is converted and contributes to a temperature rise, but it should be accounted with an appropriate recovery factor. The relationship of the recovery factor with airspeed and other environmental factors is not trivial, and for best accuracy, it should be experimentally found. Nonetheless, the tight relationship between airspeed and temperature can be exploited to have a true airspeed indication as per equation 9 in the previous link. Consequently, a total air temperature probe working together with a Pitot-static tube offers a useful redundant airspeed indication.